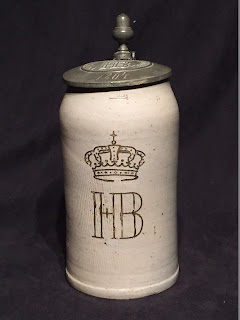 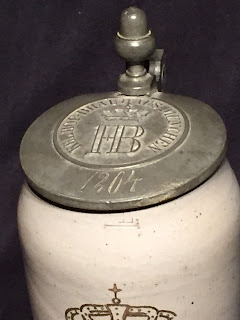 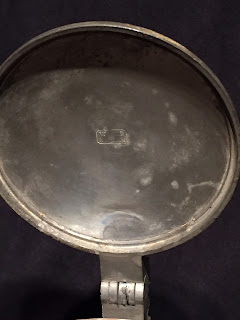 With limited time on my hands for my hobbies these days, I haven't posted in quite sometime. Last year, I purchased an interesting HB stein, which was numbered #1204. It is styled that I hadn't come across before or since. The stein body is etched with the trademarked Hofbrauhaus logo. What makes it different is that it is neatly etched in dark brown/black. The lid is the classic flat Kgl. HB lid with an acorn handle. Inside the lid the stein mark of W. Wild is present.

W. Wild produced a number of HB steins of various styles in the 1880s and 1890s. A couple of this are usually characteristic of his HB steins. The all have the same style of lid (classic Kgl. HB trademarked logo), the HB on the body almost always has a little line through the middle of the H, and on the body there is usually just HB with no crown. This particular style of his is the only style that I have seen where the crown is placed above the HB on the body.

My best estimate at a date for this stein would be in the 1890s. I am having a tough time pinpointng it more accurately than that. Wild appears to have been in business until 1898 when I believe the business was sold, and the stein mark on the inside is a very plain mark, rather than the more elaborate ones he used on some of the HB steins. 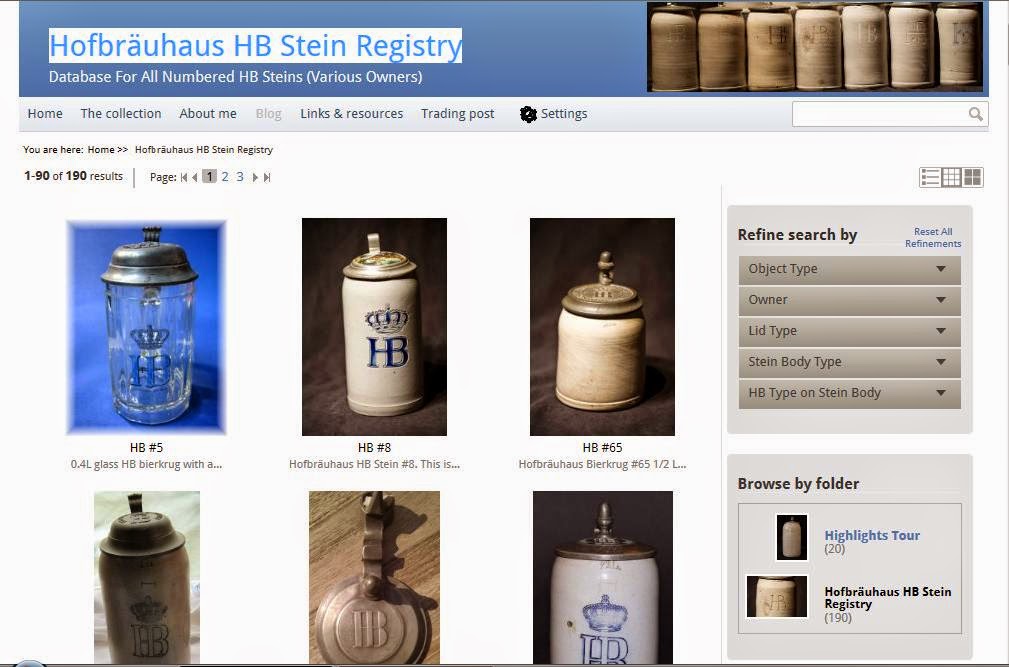 The Hofbräuhaus HB Stein Registry is now online. I had been hoping to get it online for sometime, as it was time consuming, and difficult to update and send out in the old format. I came across The Collecting Bug website and it offered the perfect template for the registry, and it was free! So far I have managed to upload 190 of the steins that were in the registry, and I still have about 40 more to go, but the rest should be in shortly. The site makes it easy to update. You can check it out at the link below.

http://www.thecollectingbug.com/hbsteinregistry/explore?2
Posted by Jordan at 20:49 No comments:

With the Hofbrauhaus' noteriety and success often comes others trying to imitate and capitalize on that success. When they started to mark their drinking vessels and other things with an HB some other competing breweries seemed to follow suit. In 1879 the Hofbrauhaus trademarked their logo to eliminate this. Even though the logo was trademarked other breweries still seemed to push the envelope creating logos that were still very similar, but obviously just different enough to get away with it. Below are a couple of images of steins from a competing brewery that I also initially believed belonged to the Hofbrauhaus, but in fact were from another brewery, proven in the postcard depicting the steins. I have seen a couple of these steins appear on eBay having an HB placed on it at some point by a previous owner, which in one case was apparent from the hinge which had been damaged during the lid switch, and the other pictured below did not have a picture that showed the back of the stein which would likely give evidence of whether or not a lid was switched. I would hazard a guess that either the stein had no lid to begin with or the lid was switched based on the fact that the HB is screened on which is something done on HB steins later than 1939 when the Hofbrauhaus no longer was known as the Kgl. Hofbrauhaus, but rather the Staatl. Hofbrauhaus. 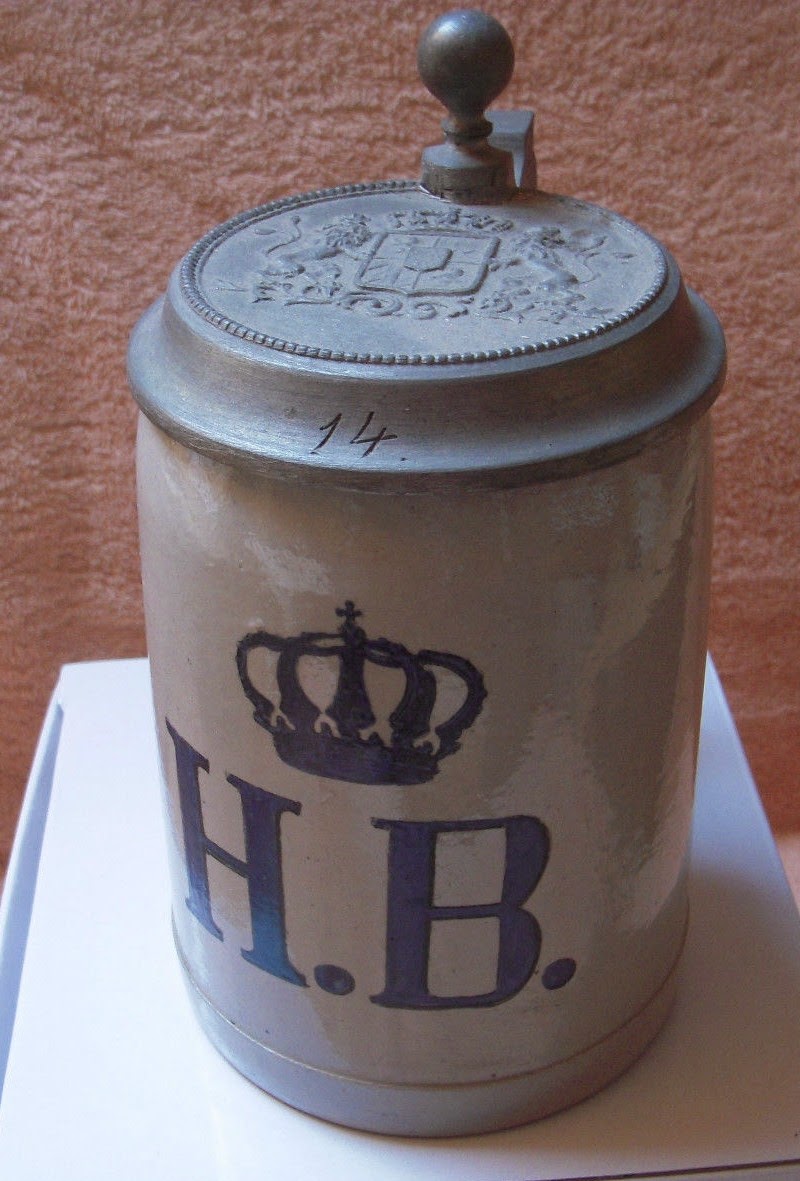 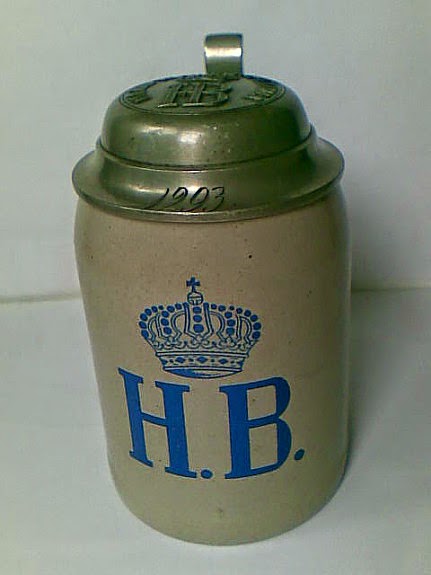 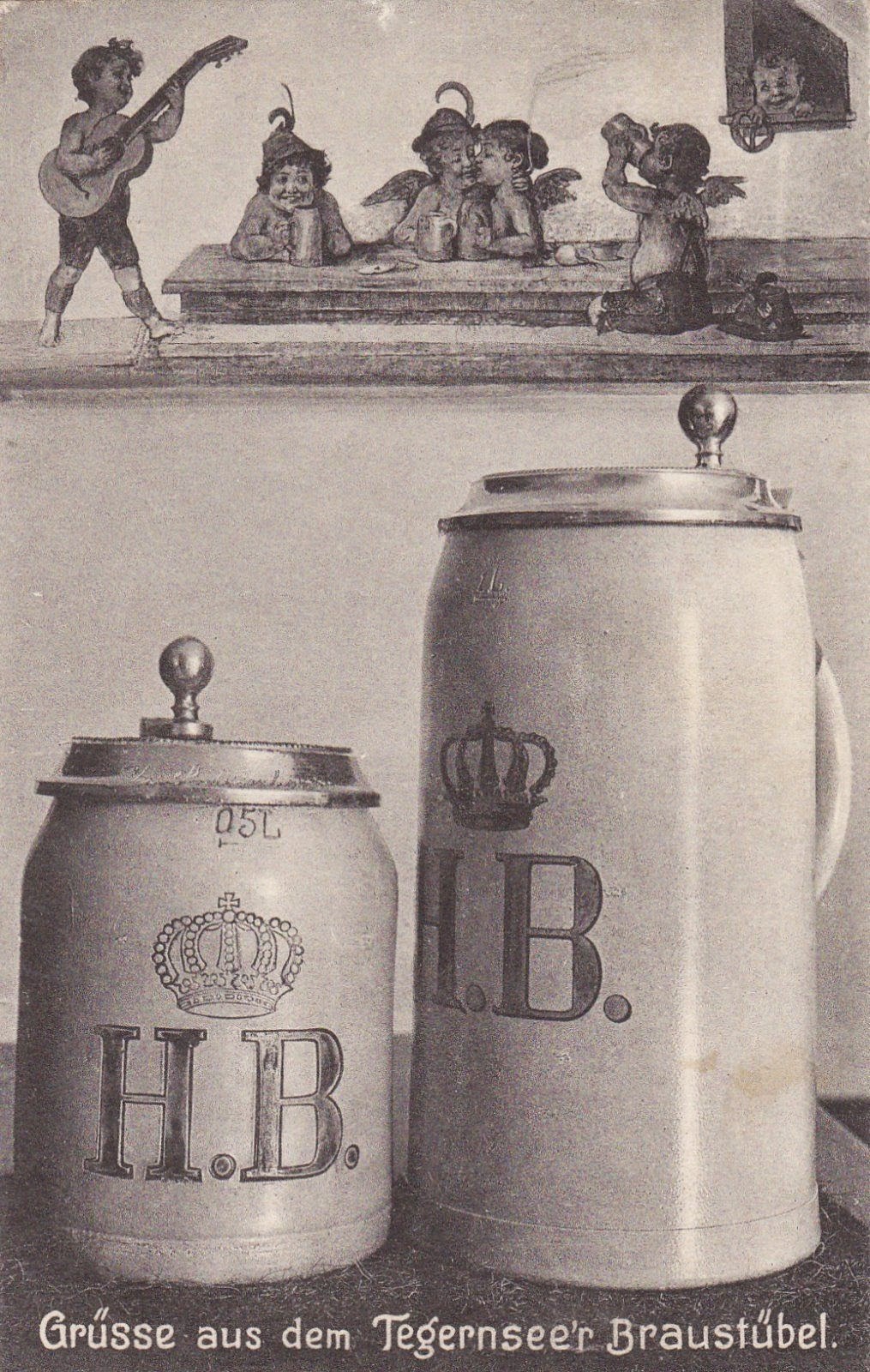 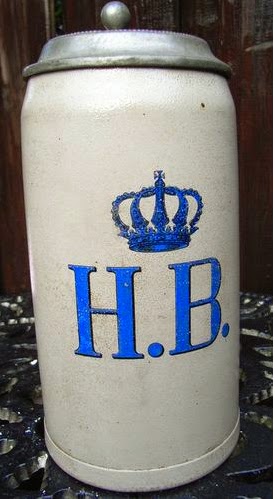 A Style of HB Stein I Hadn't Seen Before

Recently I came across a style of Hofbrauhaus stein that I had not encountered before. I was able to purchase the stein, but I have not been able to take a good look at it, since it is in transit. This style of HB stein seems to fall in between the more crudely etched HB steins with the trademarked logo on the lid and the stein featured in my "Bridging the Gap" post, that has a neatly etched blue HB on the body with no crown above it and the trademarked lid. Like these steins it has the trademarked logo on the lid, but the HB on the body has no crown above it and no colour. The style of the HB is slightly different than that of the one in the "Bridging the Gap" post. The stein however apparently has a stein mark by W.Wild as does the other two, but I have not seen it to determine which of his stein marks it is. I am not sure how many of this type of stein was produced, but it is the first one that I have encountered. It is numbered with the #8095, indicating it likely had seen use in the Hofbrauhaus. I am inclined to believe that the stein likely dates from in between 1888 and 1895. 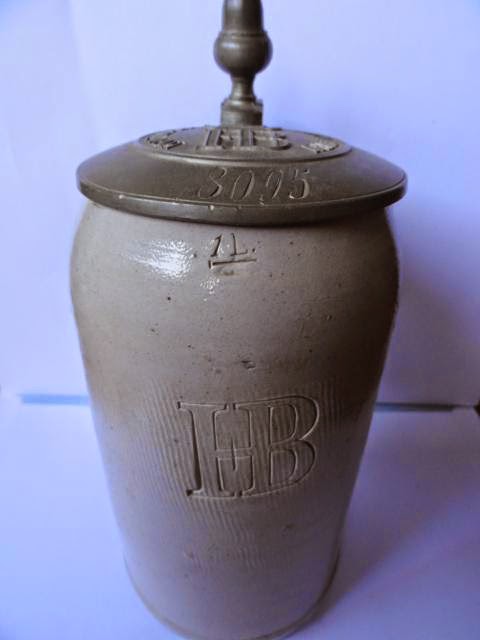 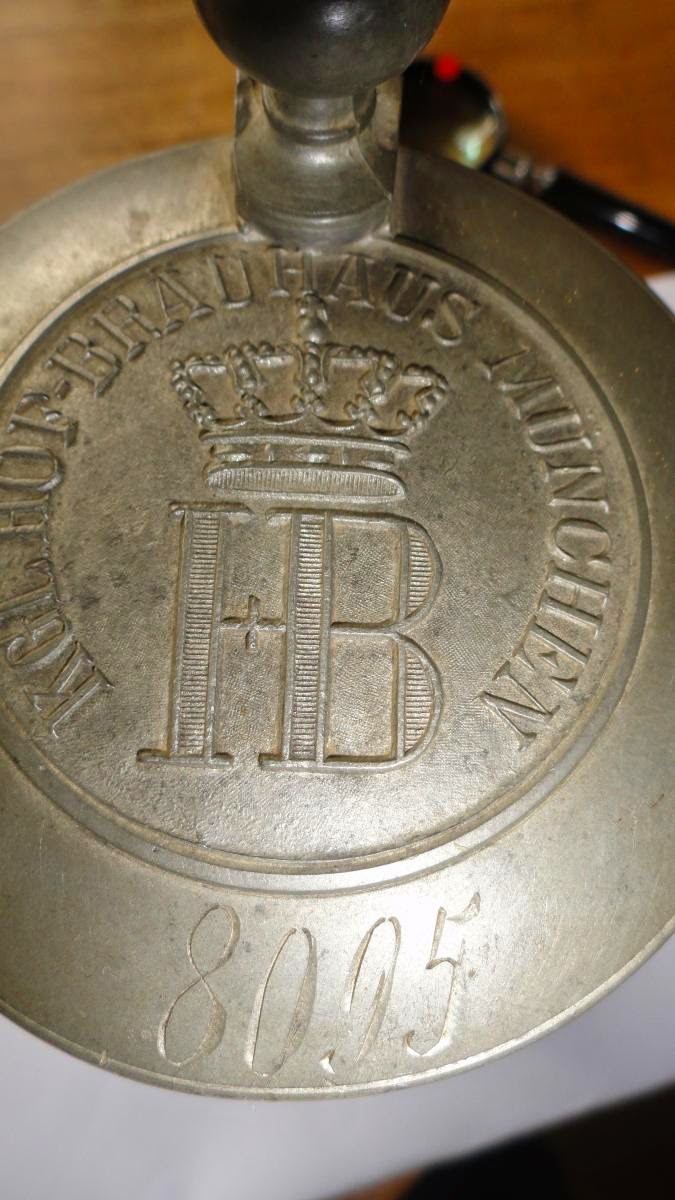 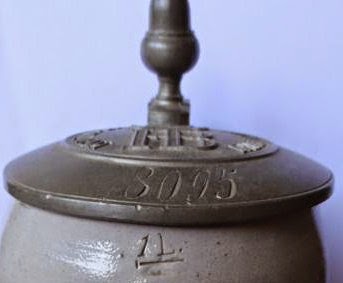 One thing that seems to become more apparent as more antique HB steins appear online are that there are a number of variations, often times very slight ones in HB steins that are of the same style. This poses the dilemma to those of us who collect these steins of whether or not to try and obtain a stein in each of the different styles the Hofbrauhaus produced, or whether or not to collect each different variation. The latter is very daunting task. As you can see from the photos below, the differences in variation are often very subtle. These differences however are also interesting, because they may also enable a more accurate dating for the steins.

This is just one of a number of examples found in HB steins of how there can be small variances within the various styles of HB steins. 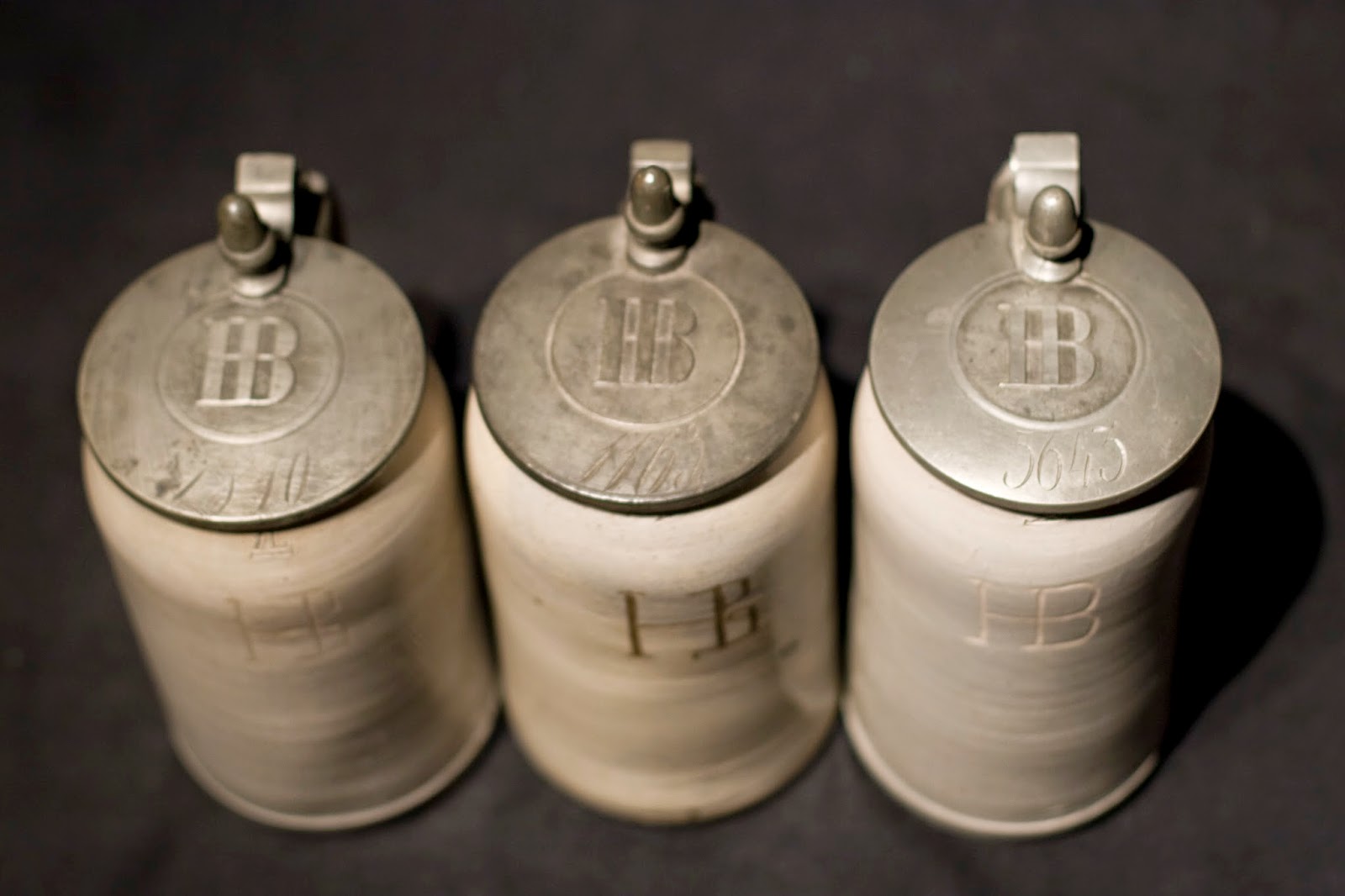 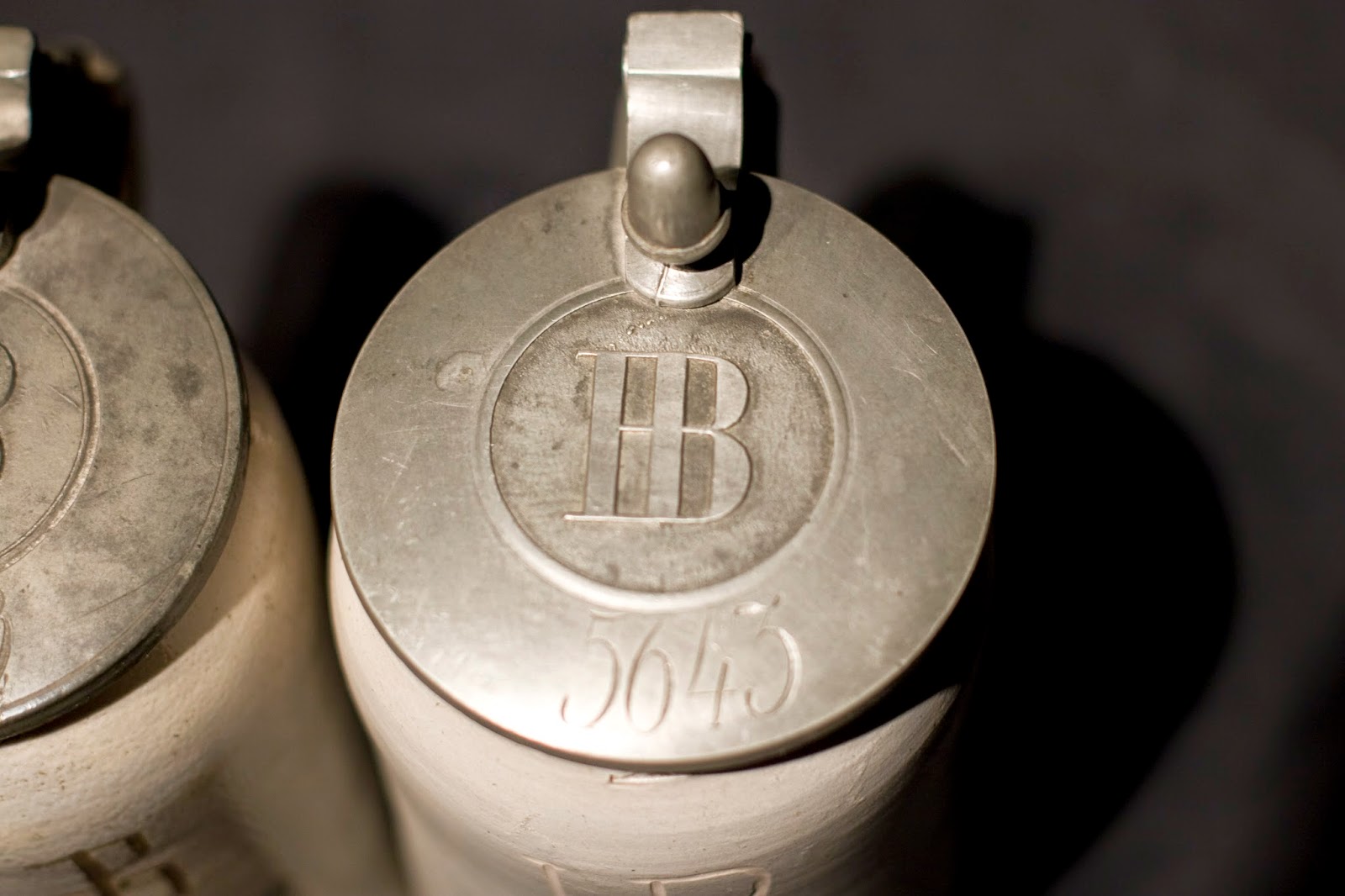 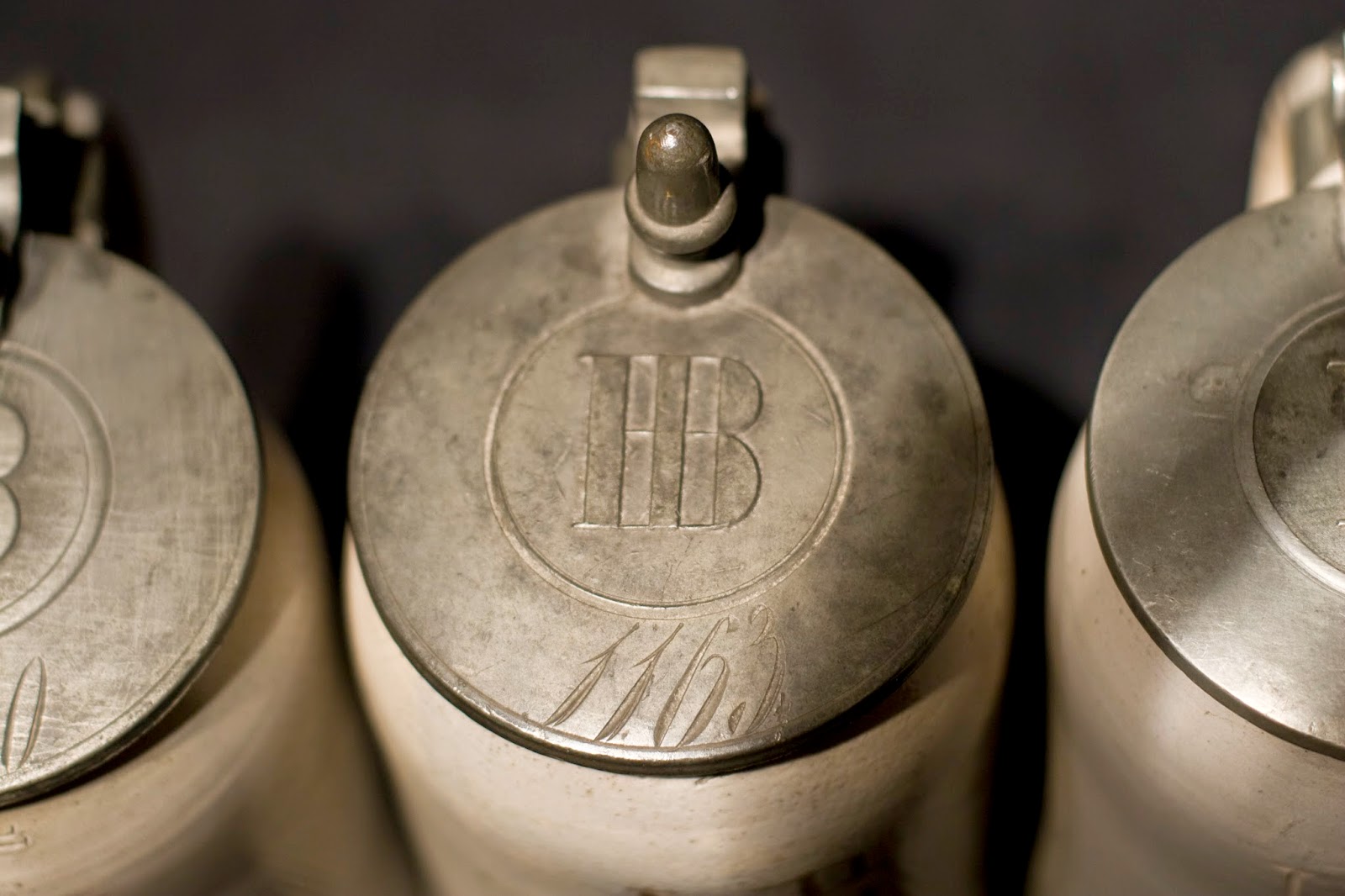 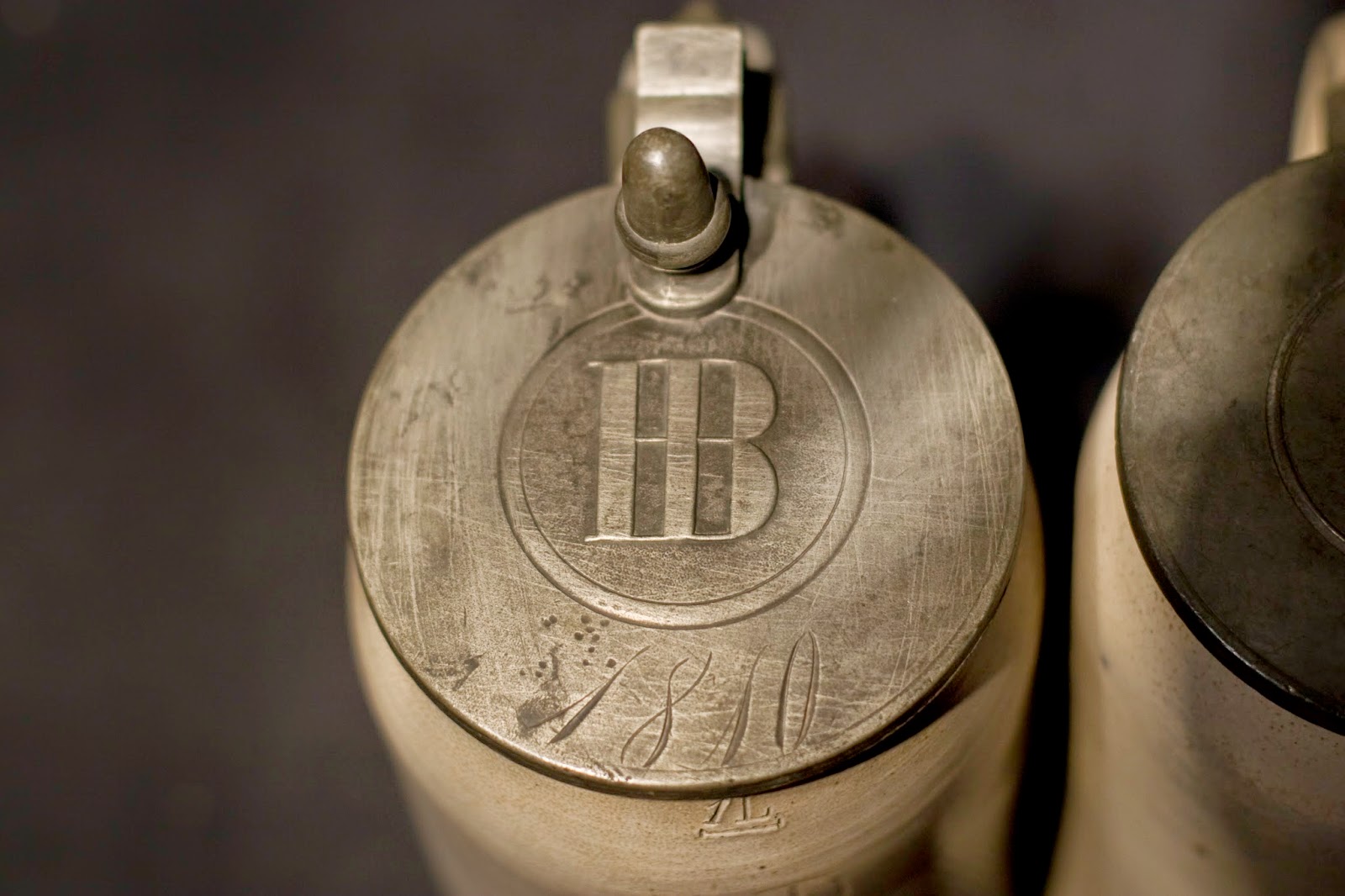 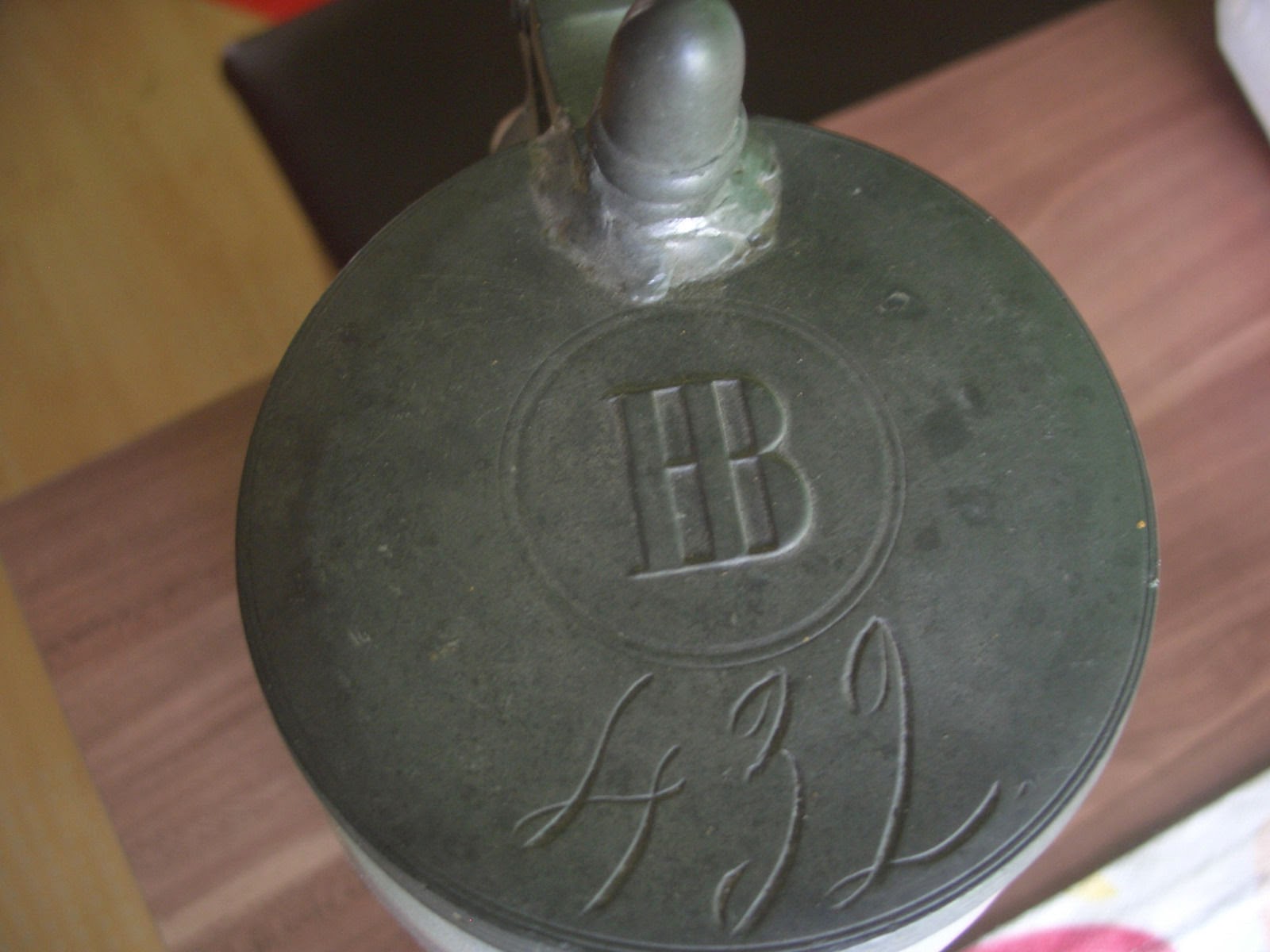 Since I have been fortunate enough to find a few more steins to add to my collection lately I decided to update the pictures of what I currently have in my HB stein collection. My main focus is on the early numbered HB steins that would have been used in the Hofbrauhaus, rather than the variant steins that they would occasionally put out. The first two pictures are of 1L steins that range in date from 1875-1890, with the exception of the one in the center on the bottom row which pre-dates 1872 and could likely be from the late-1860s. The third photo includes two steins that are similar that are like from between 1890-1906, as well as the stein featured in my last post that has the tobacco advertisement inside the lid, and a 0.5L stein that has a unique lid with the trademarked logo with the words Schutz-Marke. It age could be as early as 1879, but is uncertain for sure. The last picture includes steins that are post-1900, one of which is accompanied by an original sales receipt for the stein from the Hofbrauhaus. I also have accumulated about 50 unlidded HB steins that range in date from 1900 onward. They were the first HB steins I purchased from antique stores and garage sales before I focused my collection on the antique lidded steins. I am trying to add different variations of pre-1900 steins to my collection, preferably that are numbered. All but two of the steins pictured are numbered.
﻿ 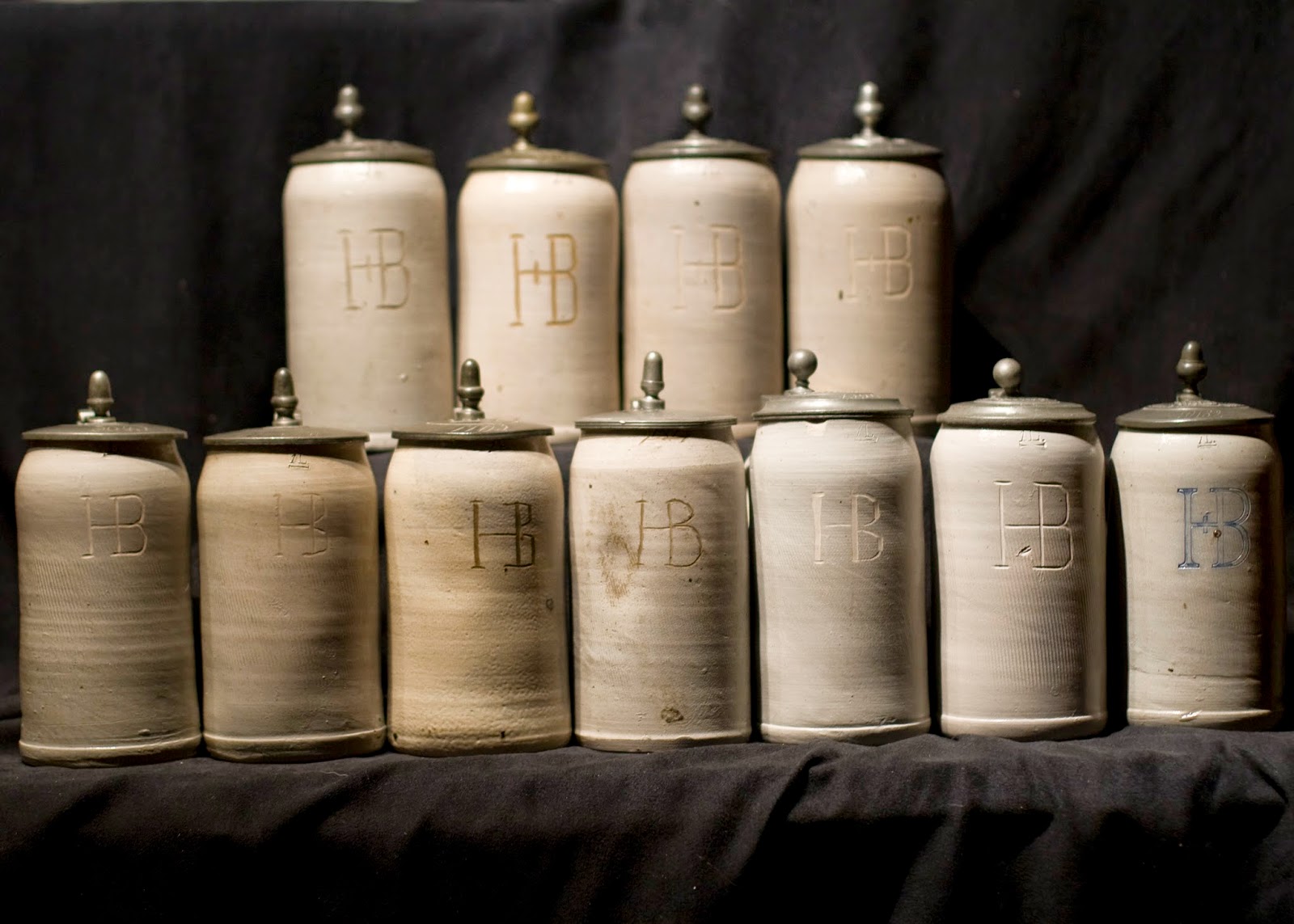 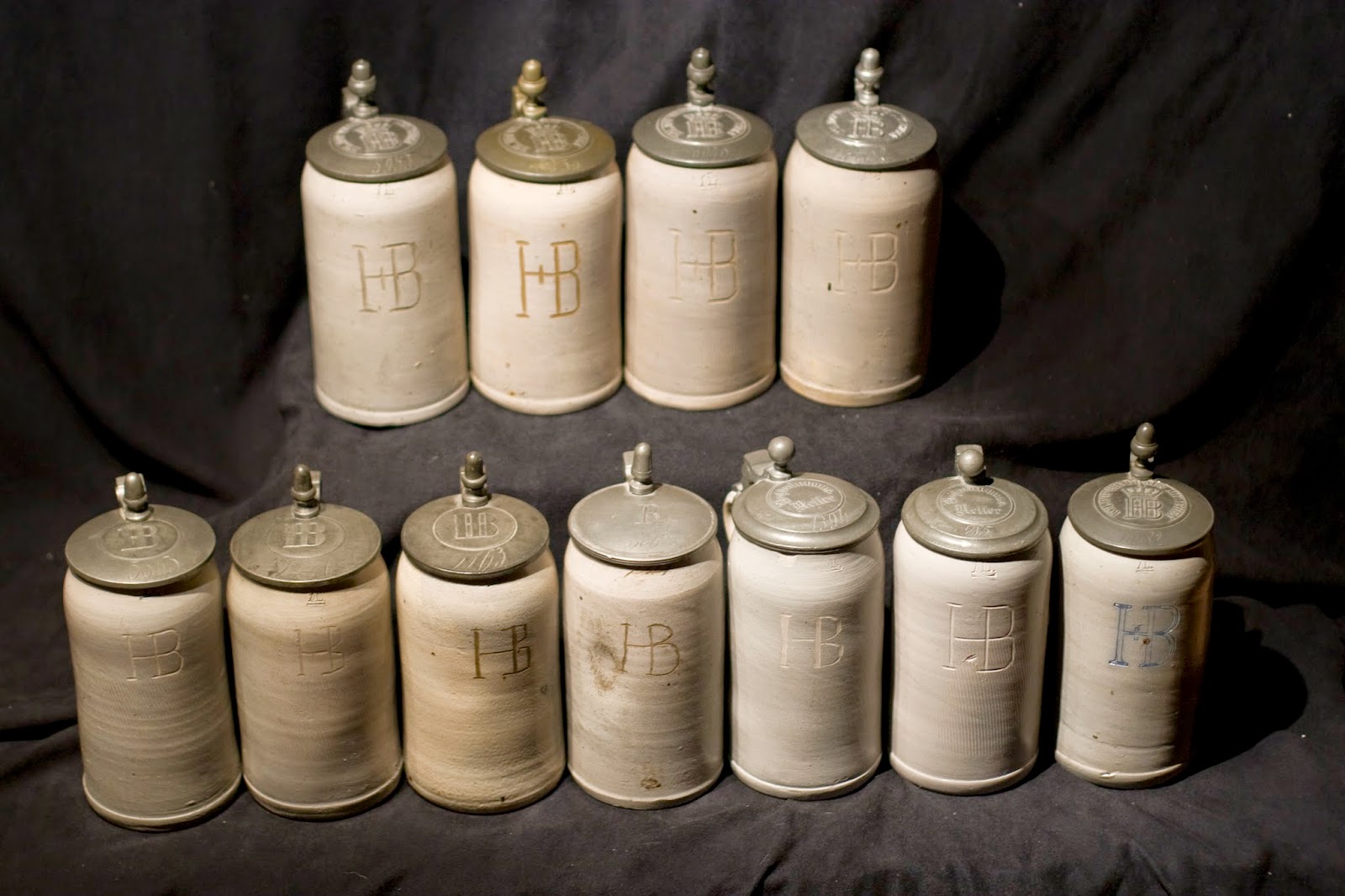 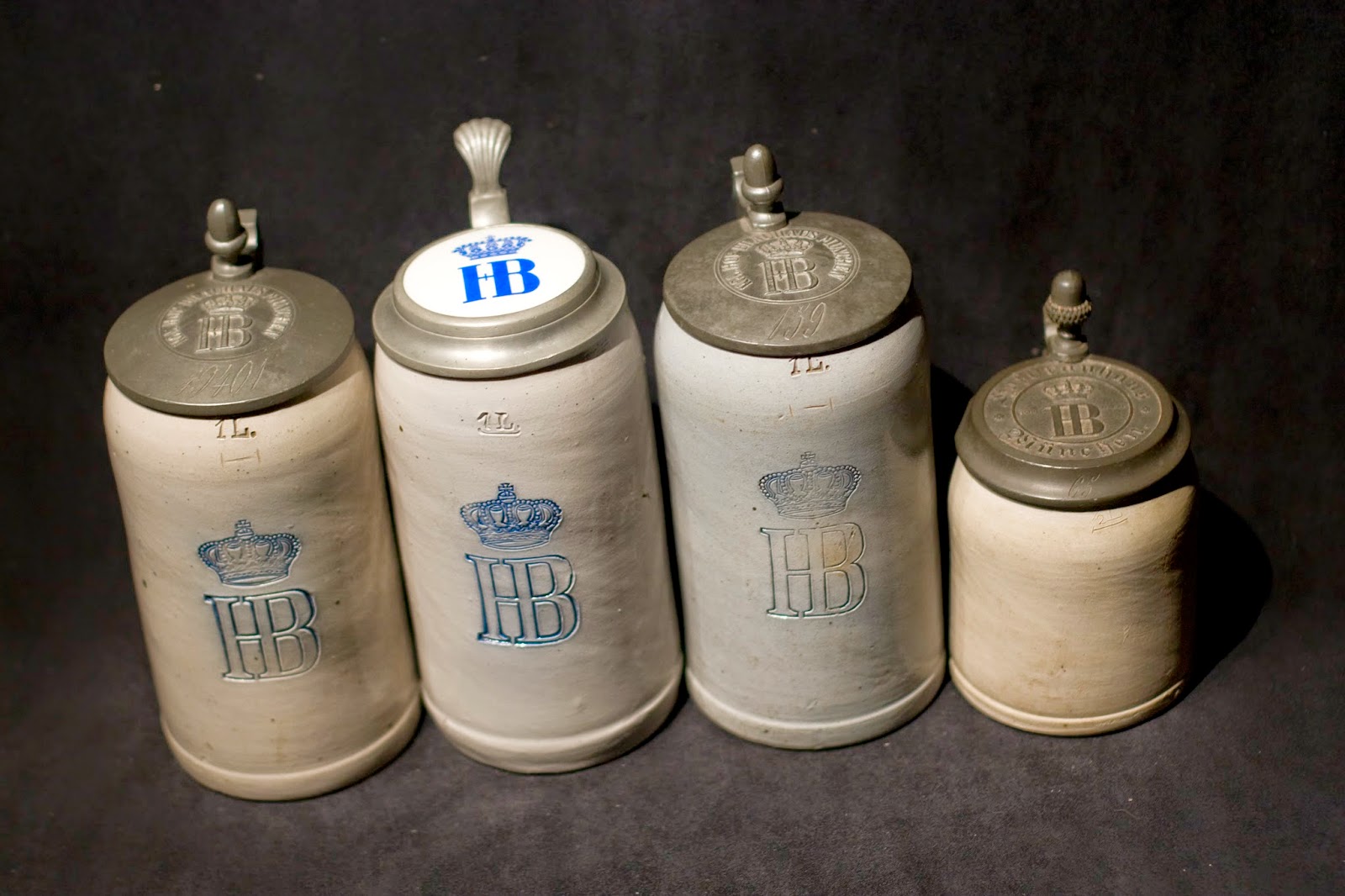 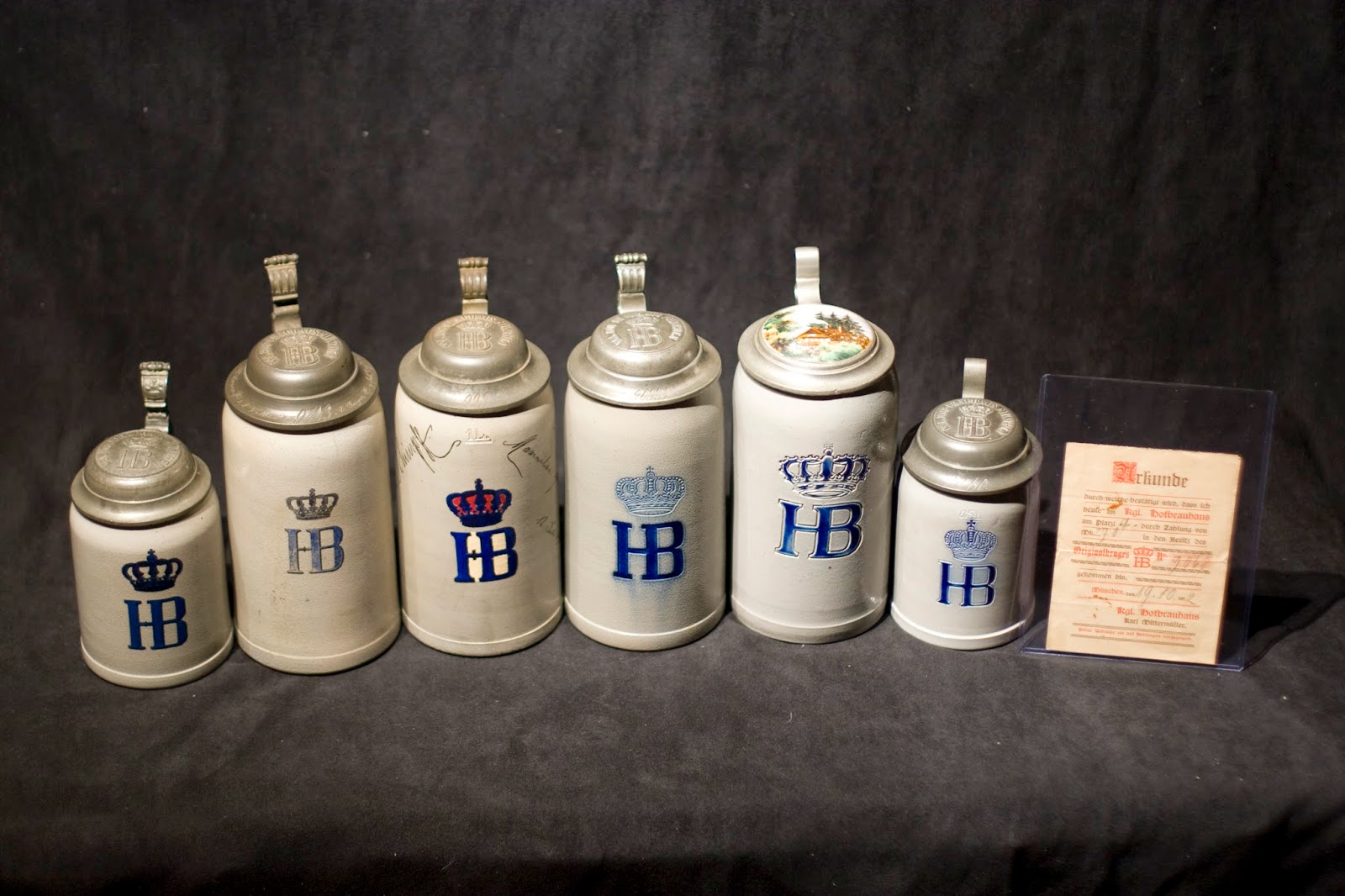 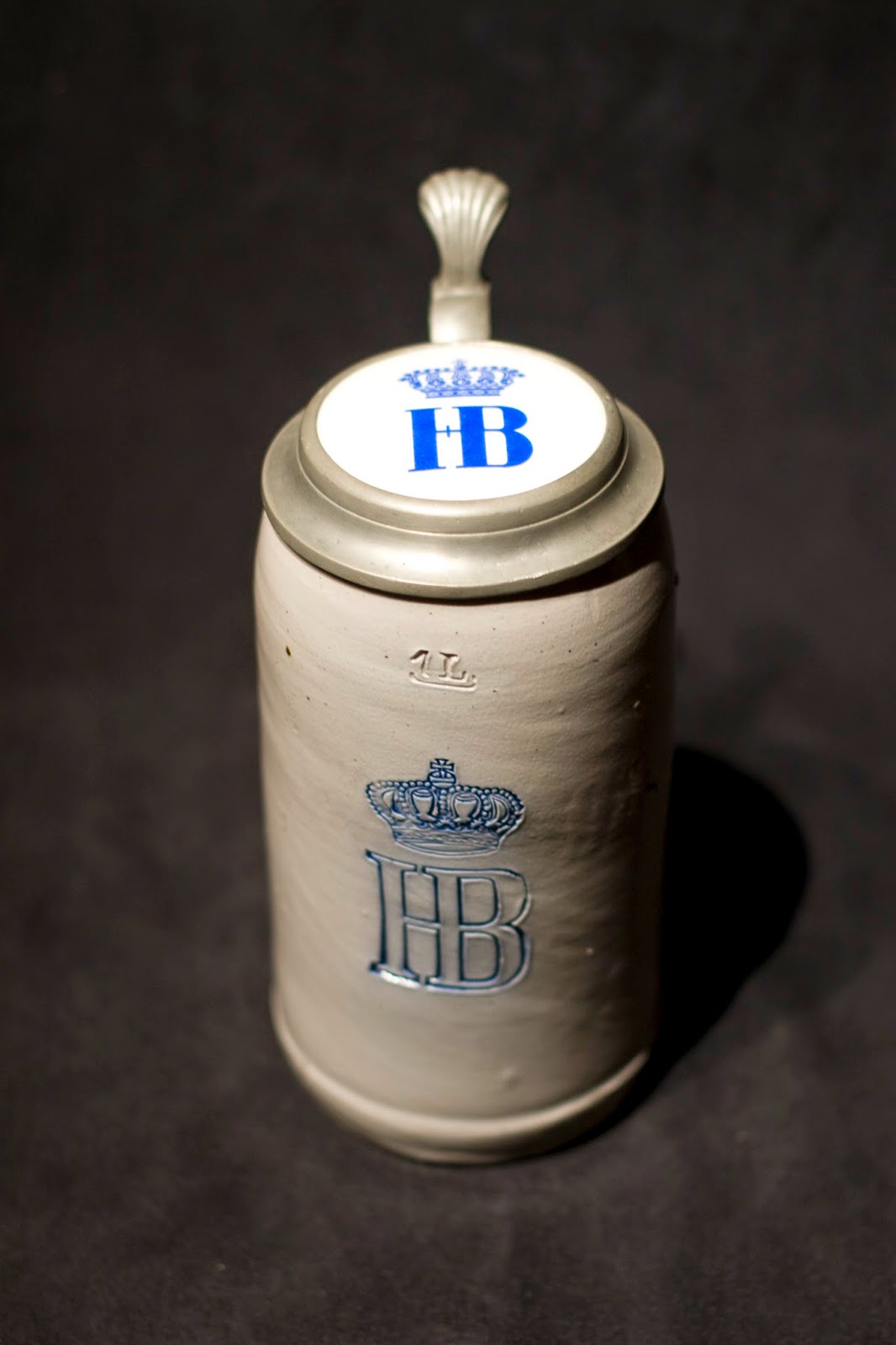 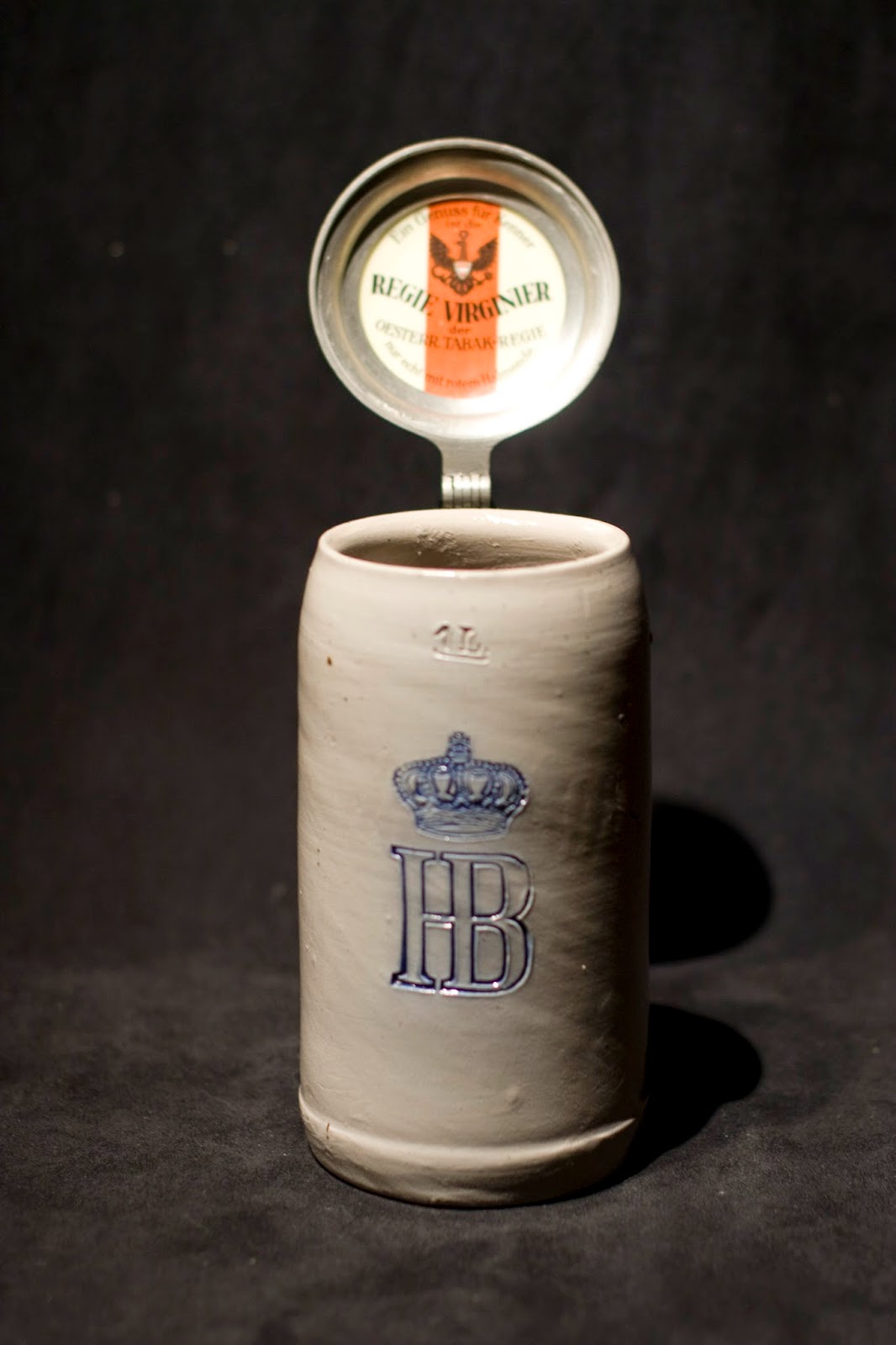 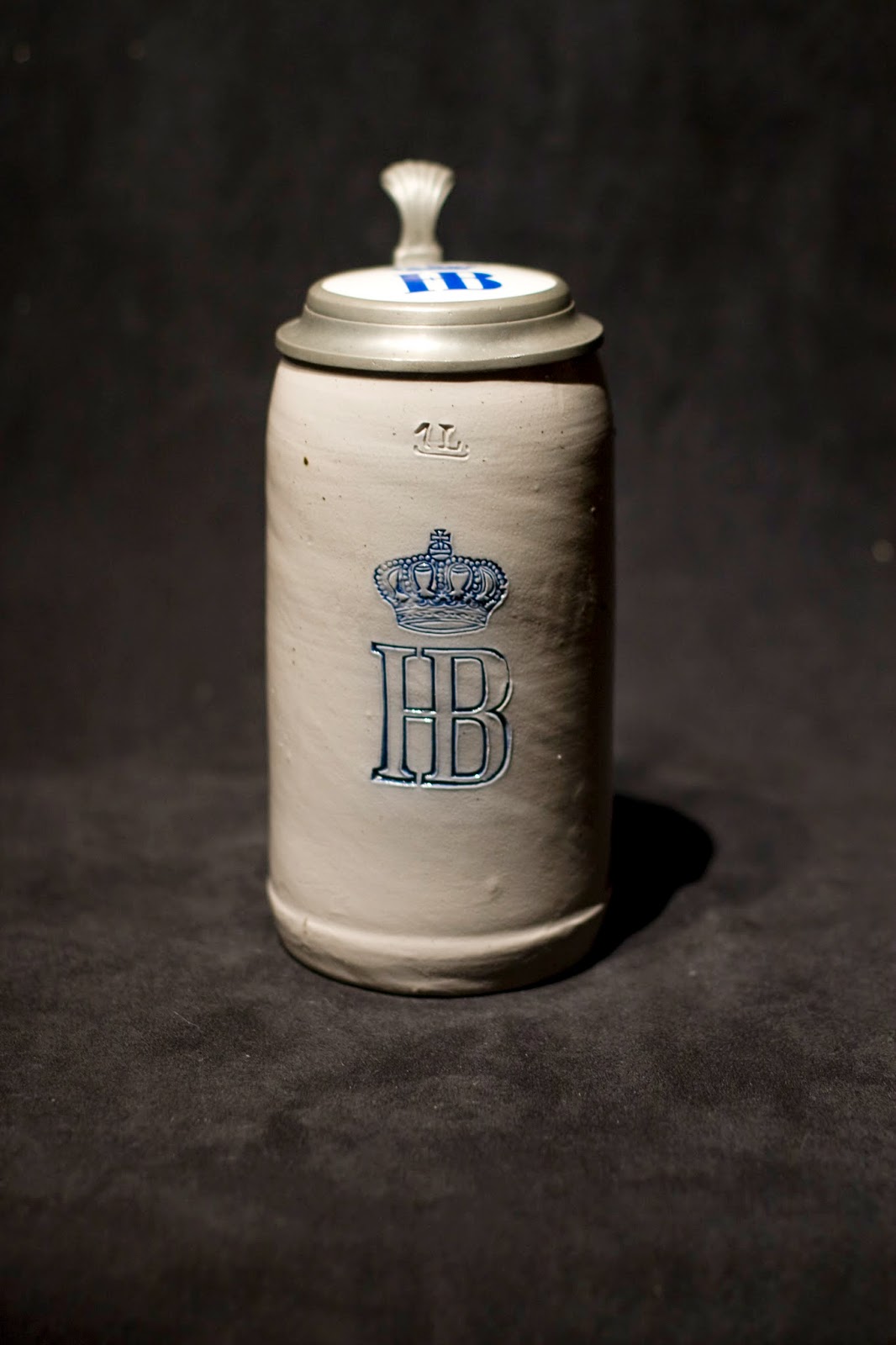 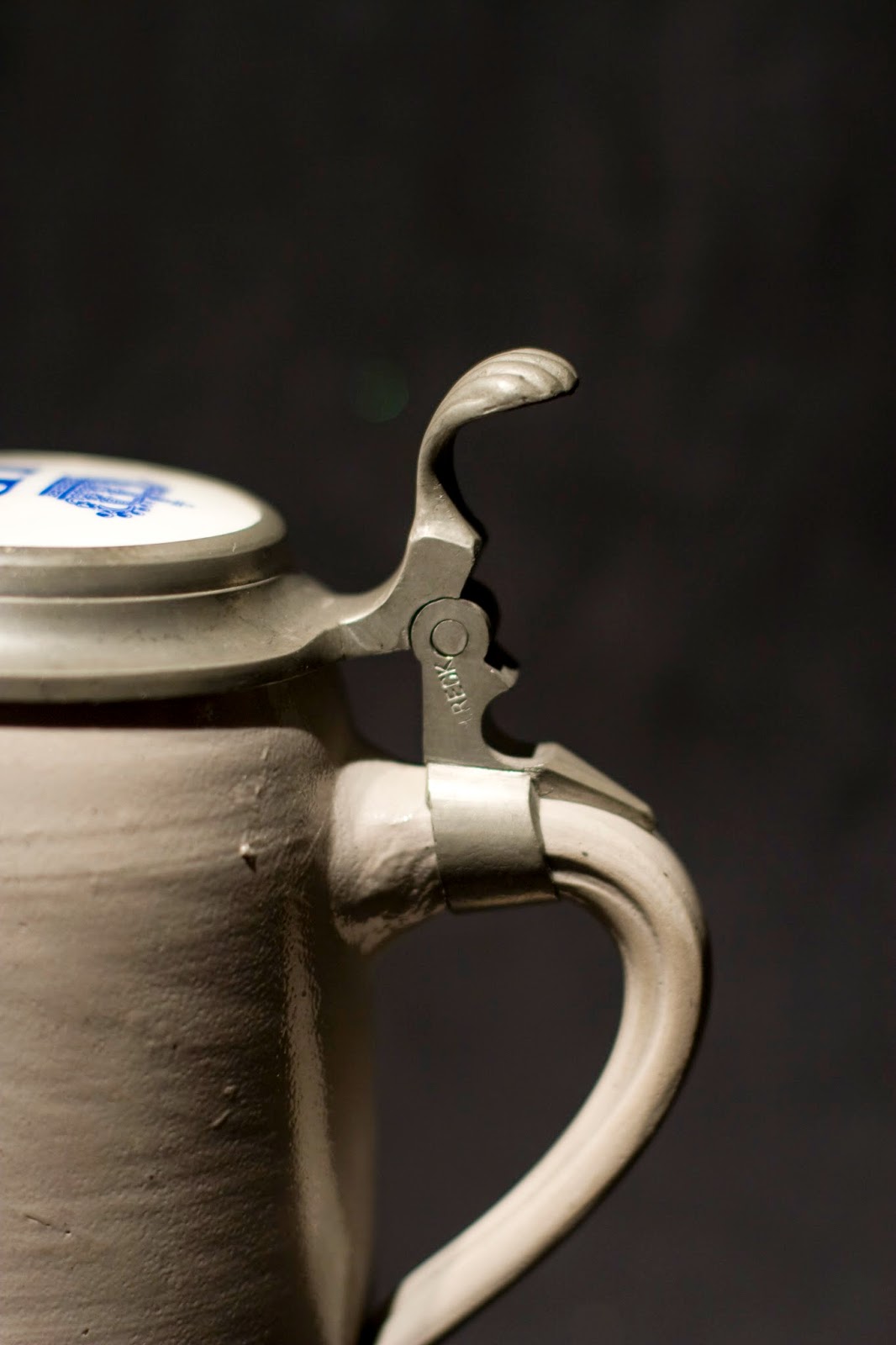 Pictured is a fairly uncommon HB stein that I recently picked up. It  most likely dates from early-1900, and bears the marking of CH. Reck from Munich (in business circa. 1893-1930) on the side of the stem just below the hinge, as can be see in the last photo. The lid is pewter with what appears to be porcelain in the centre bearing the HB logo. On the inside of the lid, is the advertisement for Regie Virginier; which is a toabacco company I believe in Austria. I have seen a handful of HB steins in this style and a couple of them have slight variations from the one that I have.
Posted by Jordan at 00:30 No comments:

E-mail me at jordanvandenberg@hotmail.com to submit a numbered HB stein to the new online registry.

Welcome everyone to the HB-Hofbrauhaus Steins and Collectibles blog. If you have ever been to the Royal Hofbrauhaus in Munich, Germany, you are no doubt aware of its rich History dating back to the 16th century, and its amazing atmosphere. The purpose of this blog is for collectors of HB-Hofbrauhaus steins and memoribilia to have a place where they can: discuss and share information, post pictures of their steins & collectibles, and connect with other HB collectors.